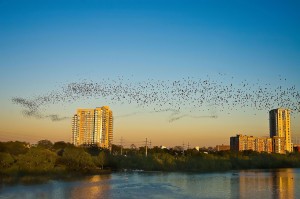 Austin Texas: The largest urban colony for bats is undoubtedly the Congress Avenue Bridge in downtown Austin. The bridge is the dwelling place of at least 750,000 bats and in the peak of the bat seasons this number can reach as high as 1.5 million. Congress Avenue Bridge is situated on Lady Bird Lake in downtown Austin. Bats have considered this bridge their safe home for a long number of years. But the number of bats has actually increased after the renovations of this bridge in 1980. The particular structure of the bridge especially its deep but narrow openings have made the bridge a perfect dwelling place for the bats. From 1980 when the bats started colonizing in the bridge at a high number the Austin community were somewhat concerned. Later when they learned that these bats consume a large amount of insects every night they were happy to welcome the bats. The large portions of bats start their migration to Austin TX during the start of March and reside the entire time until the birth of their pups spending the whole summer in the bridge. They start migrating back to the south again in November while some of the bats reside in the bridge for the whole year without any migration. 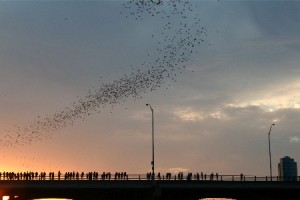 Each evening at sunset the entire colony of bats emerge out from the bridge all at the same time to start hunting for their food. This scene of a large colony of bats emerging out of the bridge in the background of almost dark sky is simply amazing. It seems to be a big bat cloud flying together over the Austin sky. It can take almost forty five minutes for all the bats to emerge out of the bridge. Although this scenery of bat clouds is common all throughout the year, the best views happen in August when the newly born pups join the colony for the nightly flights.  The Lady Bird Lake is considered to be the best tourist place in Austin for bats. People crowd at different points of the lake to watch the bats every evening. The scene can be enjoyed from a large area of the lake and even it is also worth seeing from the bridge too. The common timing of the bat flight is around 8:00pm to 8:30pm but it can happen earlier according to the sunset timing or if clouds are present in the sky in the sky.